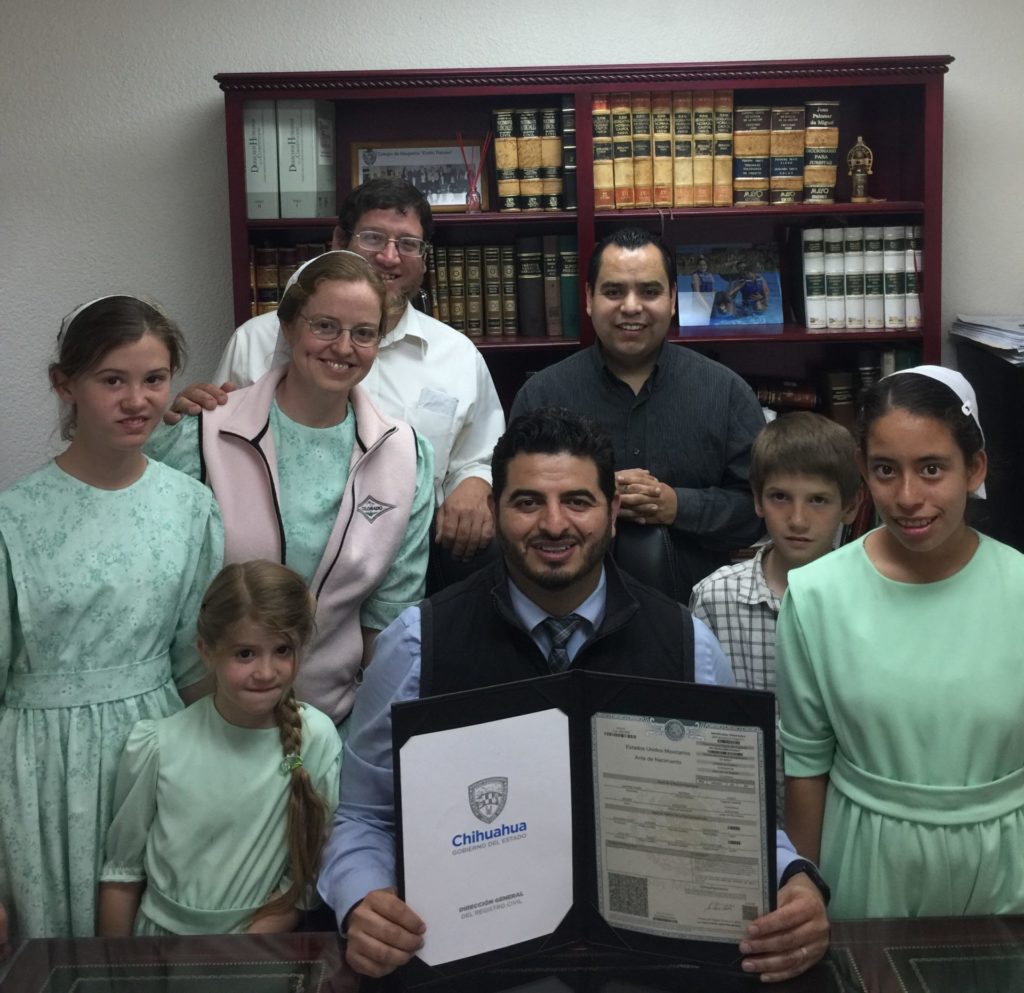 Years ago in northern Guatemala on a Mayan Indian reservation, a baby girl was born. She was named Dora Hilda Tuluk Chitai. Her family was very poor and they had to work hard simply to survive. Alcoholism and poverty were rampant, competent and safe health care was scarce, and the government of Guatemala did very little to help the Mayan Indians. When Dora was 13 she was bitten by a venomous snake. She became very ill and almost died. A kind Spanish lady adopted her so she could get the long-term medical help she needed, thus changing her last name to Ramirez Aguilar. She needed surgery to remove one kidney that didn’t survive the snake poison.

When Dora was 25, she moved north to Tijuana Mexico in hopes of bettering her life. She moved in with her mother’s cousin who was already living there and got a job at a factory. She got Mexican citizenship and started getting ahead a bit. During this time she met Alejandro Cruz Meza. Alejandro had also migrated north from Honduras, following his mother who had moved to northern Mexico with his two youngest brothers earlier. He was not one to stay in one place for long and was addicted to alcohol.

At some point, they decided to move in together, and soon a baby was on the way. The pregnancy was very difficult due to Dora’s health issues from the snake bite and put a lot of stress on her remaining kidney. On February 20, 2003, her tiny baby girl was born. The baby was 3 months early (28 weeks) and very tiny. Sandra Isabel was a little fighter and had a strong will to live. She spent 2 months in the hospital and Dora was delighted when they could finally bring her home.

Dora’s life was crumbling around her. She began regular dialysis treatment and felt ill a lot of the time. Alejandro helped when he could but drank most of their income away. Dora managed to save enough money to buy a small piece of property in Tecate. They found a small used camper and moved it onto the property, making it their home. Dora’s cousin was the pastor of an Adventist Church and they were her number one supporters. Sometime in her life she turned to God and became a Christian, and then attended her cousin’s Adventist church and became a member. The church did what they could to help and support her. The pastor also said Dora and Alejandro got married.

Dora was very devoted to her tiny daughter and loved her dearly. When Alejandro came home drunk and violent, she would slip away to her cousin’s house with Sandra until the storm passed. Dora worked at a sewing factory and provided for her little girl. Alejandro worked when he wanted to and took care of Sandra as he could. He would take her along to his appliance repair shop and she watched him at work or roamed the streets at will.

At age 6 Sandra started school. By now Dora knew she was terminally ill with no match for a kidney transplant. She was frequently in the hospital for a week or two as her kidney became less and less functional. She worried and prayed for her daughter while her husband drank and partied with his friends. Dora wanted Sandra to stay with her cousin Javier and his wife but Alejandro would more often leave her with his friend Alma, who had several small children of her own and loved Sandra like her own daughter. Dora made preparations for Sandra. She put the piece of property in Sandra’s name. She took out life insurance that would benefit Sandra. She talked with Mr. and Mrs. Javier about Sandra and they promised to take her in as their own daughter and care for her.

Sometime, probably in December of 2011, Dora was admitted into the hospital for the last time. The New Year came and she lingered on. Sandra, who was 8 now, stayed with Alma, who cared well for her. Mr. and Mrs. Javier continued watching over Dora, visiting her at the hospital. The last time they were in to see her it was obvious Dora had only hours to live. Her kidney was no longer functioning and her lungs were filling with fluid. Her body was swollen and her face hardly recognizable. But she was still able to communicate by blinking her eyes. Mrs. Javier asked Dora if she was worried about Sandra. Several tears rolled down Dora’s cheeks as she blinked in the affirmative. Kindly and gently Mrs. Javier told her she needs to place her daughter in God’s hands. He is big enough to answer her prayers and care for Sandra in spite of the impossible circumstances. She also promised to do all in her power to raise Sandra as her own daughter. Dora relaxed and a few hours later passed away. Dora was only 35 years old. Sandra was 8 years old.

Alejandro was belligerently adamant that Mr. and Mrs. Javier would not raise his daughter as an Adventist Christian. Neither did he want Alma to take her away from him. He placed her with another friend of his, a woman who was mentally unsound. In February, Sandra turned 9. She continued going to school but was not doing well. She could still not read. Alejandro tried in his own way to care for her but his addiction clouded his judgment and he was unable to provide well for her. After several months, the neighbors reported the case to DIF, who investigated and removed Sandra from the situation. DIF picked Sandra up while she was at school and took her for questioning and a doctor visit. They called Shining Light Children’s Home to see if they would have room for a 9-year-old girl. She settled in quietly, as was her nature, and blossomed in the security of a Christian environment, 3 full meals a day, and a healthy schedule.

Meanwhile, Alejandro was very angry that his daughter was taken from him. He went to the DIF office and had it out with them. They filed a report against him, refusing him any visiting rights to his daughter due to his violent and unpredictable nature. Alejandro turned to Javier, begging him to help do whatever it takes to get Sandra back. Javier told him kindly but honestly that he was not safe or fit to care for his daughter and to leave her in the safe place she was. There Sandra was getting 3 meals a day, a bed at night, love and security, and an education. If Alejandro really loved her then he would leave her there in peace. Alejandro saw the wisdom of this advice and agreed on the condition that Javier would somehow help him slip in to see his daughter one last time. Javier arranged for a church group to visit the Children’s Home and brought Alejandro as one of the group. Alejandro spent some time with Sandra, hugged her, and walked out of her life with no explanation and no looking back. Sandra was 10 years old.

In August of 2012, we moved to Tecate, Mexico. Sandra was a quiet little girl with big ears and cute as a button. There was no light bulb moment of “That is our daughter!” but a slow building of trust and friendship over the years. When Sandra was 14 years old she indicated to us that she would like for us to adopt her. She had been praying that God would give her a Christian family but had little hope that it would happen unless we would. It wasn’t until she turned 15 that the doors opened and it became clear that God was leading us to this.

She seemed like such a lonely little soul, so patient and so hopeful and so wistful and so accepting of her lot in life. When we told her we would like to be her parents she just sat there with tears rolling down her cheeks. We told her to take all the time she needed to think about it but she said she didn’t need any time. It was a direct answer to a very specific prayer of hers that God would give us to her as her forever family.

We had no idea what all the adoption journey would entail but it was worth every difficult moment. It took us a year to complete the home study but finally, on May 10, 2019, we were called into the DIF office to pick Sandra up. She was 16 years old. That was such a happy day for our whole family. It was every bit as special as having a baby being born into the family although in a very different way.

We were on a timeline to complete the adoption before Sandra turned 18 and it was one miracle after another that we saw happen for it to be completed. When COVID hit we lost 5 months while all government offices closed down. Alejandro could not be located which extended the adoption process an extra 6 months. The lawyers did in the last 7 months what usually takes fifteen months to two years. The adoption was finalized two days before her 18th birthday. In April of 2021, we received her new birth certificate with her new legal name, Sandra Isabel Rohrer Yoder. It took exactly three years to complete the adoption from start to finish.

Sandra is a gift of God to our family, a miracle of answered prayers, and living proof of a loving God who doesn’t forget. Prayer changes things and impacts lives way beyond anything we will ever know and understand. Dora did not live to see God answer her prayers, but God did answer her prayers abundantly far above what she asked. What can we do but bow down and worship? God is good and kind and just and faithful.